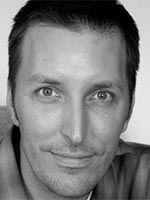 Oscar Bucher creates narrative films, documentaries, and music videos, along with innovative commercial works for some of the world’s top business leaders, including Genentech, SAP, PayPal and many others.

Bucher says, "As a passionate filmmaker and storyteller, I am driven to create works that engage the audience with compassion, humor, and surprise, allowing us to share our humanity through bold cinematic narratives. Simply put, I entertain people with really cool stories."

Writer/director/editor of several award-winning short films, documentaries and music videos. Recent works include: Too Much Horror Business, a documentary for Metallica guitarist Kirk Hammett; Nelson Algren Live, a feature-length film starring Willem Dafoe; Getty Lucky, a documentary about a lounge singer/private eye; and Waiting for a Train, which was recently featured on PBS.